Arthur is Celeste's younger brother and the uncle of Babar's children. he wear's a red sailor suit, and his alter ego was the, Scarlet Pachyderm which scared little Isabelle, it seem's he is the adventurist one in the family, he also like's boats and traveled one time. the kids thought that some pirates where after him. but in fact one of them just wanted his parrot to talk 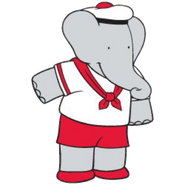 He and his sister as children.

Arthur dressed as The Scarlet Pachyderm which that Isabelle felt scared in "The Scarlet Pachyderm".
Add a photo to this gallery
Retrieved from "https://babar.fandom.com/wiki/Arthur?oldid=4628"
Community content is available under CC-BY-SA unless otherwise noted.