Basil is Rataxes ' personal valet and assistant. He is very short compared to most others, but is packed in a punch. He served as Rataxes' travel agent as well as his spy on seldom occasions. More often than not, Basil is shown to be more intelligent than his master, even when it involves him poking fun at him from time to time in an extremely subtle manner. He seems to like Babar and gets along with him just fine. He is shown to be a wussy when Rataxes gets angry at him, but manages to keep his calm in the end. He is also obliged to take care of Victor , Rataxes' son, should anything happen to him.

As far back as the old kingdom, Basil was Rataxes' right hand man and was often asked to look into matters in Celesteville and give advice to Rataxes. Just like Pompadour, he knows all the laws of the land 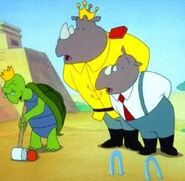 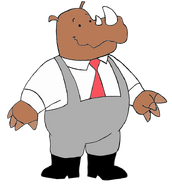 Add a photo to this gallery
Retrieved from "https://babar.fandom.com/wiki/Basil?oldid=5934"
Community content is available under CC-BY-SA unless otherwise noted.