Dawn Greenhalgh
Tara Charendoff (Young Celeste)
Elizabeth Hanna Babar: The Movie
Sarah Polley (Young Celeste) Babar: The Movie
Queen Celeste is Babar's lovely wife and Arthur's elder sister. She is the matriarchal monarch queen of Celesteville, the capital of Babar's elephant kingdom. They have 4 children together. She wears a crown just like Babar is usually seen wearing a pink long-sleeved floor-length gown with frilly white cuffs and collar as well as a blue gem.

When they were children she and Babar would play together in the jungle, when Babar got separated from the herd, she and her brother Arthur went to look for him. She enjoyed her time in the city, especially the beauty store. After a day in the city, she told him that they had to return home to help the herd. When they returned to the jungle, Celeste was willing to help Babar get rid of the hunter, or help in any way. While they were always good friends, Celeste and Babar started to have a boyfriend and girlfriend relationship in Double the Guards.

She was very determined as a child or as Babar called her dedicated. When she was the understudy for the greatest but also rudest ballerina ever, she was determined to learn the entire performance and even after the leading lady insulted her she still wanted to practice hard.1 After a crash with Zephir she wanted Zephir to pay for her broken bike, not wanting the accident to be her fault, and even took the argument to court.2 She, Arthur and Zephir pretended to be the Polymosh to scare the railway men away from Pleasant Valley so that it would stay exactly as it was when they lived there.3 Her biggest determination was when she was put in charge of keeping Celesteville lake free of pollution, because once she set her mind on something nothing can stand in her way. Pompadour did not agree with her methods saying that she is ignoring proper protocol. This lead to a falling out with Pompadour as she said to him, If we left everything up to protocol nothing would get done! After she is forced to leave by Pompadour she does so, and when he apologizes, she is hard to apologize too.

Like all mothers, Celeste cares very much about her family and her children, even on occasion calls the triplets “babies,” even though they are 10. When they floated away in a balloon, she and Babar refused to rest until they found the children and returned them home. 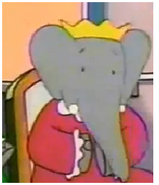 "I don't care! Obviously you don't think we can have enough fun without them tagging along! I'm going home!"

With her little brother Arthur as a child in the pilot. 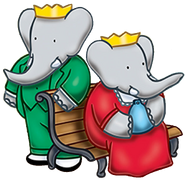 Young Celeste in Babar: The Movie
Community content is available under CC-BY-SA unless otherwise noted.
Advertisement