Lord Rataxes is the King of Rhinoland. He has a son, Victor, with his wife Lady Rataxes, Basil is his servant, advisor, and occassional accomplice.

Rataxes, in contrast to King Babar , rules his kingdom with an iron fist: this is shown by his demeanor, outfit and general behavior among his subjects. Because of this, Rhinoland exhibits many more characteristics of a dictatorship compared to Celesteville , which seems to be ruled in a more benevolent manner. Rataxes is often consulted directly for varying issues within the kingdom, and is in full control of the chain of command.

Rhinoland consists mainly of a deserted wasteland which that resembles of the Sahara Desert, along with outskirts of jungle near the boundaries. There do not seem to be any concentrated cities in Rhinoland, instead living establishments are very spread out and the general population seems to have a very rural lifestyle. Buildings in Rhinoland are constructed of a sandstone-type material, and are shaped almost exclusively into pyramids. The largest one, that houses Rataxes' royal family along with his cohorts, is easily distinguished by its more elaborate design and carefully decorated ornaments around the premises.

It can be noted that Rhinoland is substantially less developed than Celesteville, and the whole of Elephantland in general. Rhinoland's infrastructure and general layout seems typical to that of a third-world country, and the additional presence of a heat-infested barren savannah does not help alleviate this perception. Rhinoland citizens are also on average considerably poorer than Celesteville residents, and this may due in part to Rhinoland's lack of housing and planning management. Along with poverty, corruption seems to be a serious problem in Rataxes' kingdom, as seen in episode "Kings of the Castle" (where Basil explains to Babar how Rhinoland customs officials can get away with impounding stolen Celesteville possessions). Rataxes however understands that his kingdom is not as progressive as Babar's and defends his argument due to the mentality of the rhinos and how his government system keeps them in check.

Rataxes himself is portrayed as emotionally immature in several circumstances. In "Fathers and Sons", he shows that he cannot accept defeat and that he must cheat to get what he wants, dragging his son into his path of destruction. In "Helping Hands", he refuses to sign a peace treaty with Babar that could jeapordize the relationship between their kingdoms because a personal belonging of his was mistreated by Babar's associates. And in "The Scarlet Pachyderm", Rataxes deliberately sets a road tax for all passerby's through his kingdom because he was convinced that Babar forgot to send him an invivation for a masquerade ball being held in Celesteville. He has a short temper, a domineering personality, and can be very inpatient at times.

Rataxes perceived authority in his own kingdom can be questioned as well. While Rataxes paints himself as a powerful and just ruler, his more competent and intelligent servant Basil is the one who appears to get any actual work done. Basil believes his boss to be a clever schemer, but a coward when it comes to carrying them out. Rataxes often belittles Basil for being incompetent himself, but this is as a result of Rataxes' unpredictable nature and sometimes unreasonable demands of him. His wife Lady Rataxes is also shown to exhibit a strange form of control over him, and Rataxes frequently avoids her presence when she is angry. As such, it can be noted that Rataxes' decisions in his kingdom are greatly influenced if not directly impacted by outer sources.

Rataxes is a strict, authoritarian parent to his son Victor. In the episode "Radio Riot", he is seen berating him in complex ways and teaches him harsh methods of how to deal with disobedient citizens or stubborn employees. Through these actions, Rataxes is shown to have a more Eastern-style approach to parenting, and greatly differs to that of Babar's philosophy which caters more to Western-style disciplinary practices. This difference in mindset is what causes Victor to rebel against his father, but Rataxes inevitably sets out for revenge. Although he shows signs of being distraught, it is clear that Rataxes loves his son and only wants the best for him, his flaw being his uncertainty of how to show that love.

There are times when Rataxes has turned on Babar with great hostility. Rhinoland has even officially declared war on Celesteville during Babar's younger years, but Rataxes was not directly responsible due to him being tricked by General Pamir, a warmongering eccentric who wants nothing more than to see defeat fall upon Babar's kingdom. However, with the vast majority of conflicts, Rataxes manages to soothe the rough patches between him and Babar and call it day, as especially seen in "My Dinner with Rataxes".

Rataxes is quite tall and possess a great deal of physical strength. In "Kings of the Castle", it is mentioned by Basil that he could out-wrestle any one of his royal guards if challenged. From this i,t is implied that Rataxes only manages to stay in his position of power due to his physical strength at all. Along with these qualities, Rataxes also seems to use violence to solve many problems that come across him, and this mindset seems to be very prevalent among the rhino population in general. Rataxes does not tolerate disrespect in any way, shape o,r form, and he is quick to enforce the consequences of such behavior.

Rataxes and Babar often ideologically oppose each other in many respects and have a hard time understanding where the other is coming from. This is not to say that Rataxes does not play a comedic role in certain episodes, as he also fulfills this opportunity quite well. He is shown to be a "softie", and can be described as being rough and tough on the outside, but has a heart of gold on the inside. In reality, his feelings are quite sensitive and he displays tough love on a number of occasions to cover for his deep feelings for his loved ones. This is especially true in episodes such as "The Diaperman Cometh" and "Victor, Victorious" where his inner self comes out to shine. Although he is greedy and self-centered, his heart is good and his alter-ego is what gets the better of him. 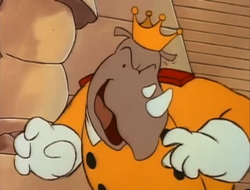 Go to see Lord Rataxes/Gallery
Add a photo to this gallery
Retrieved from "https://babar.fandom.com/wiki/Lord_Rataxes?oldid=4835"
Community content is available under CC-BY-SA unless otherwise noted.