Pompadour is Babar's royal valet and servant. He is in charge of the Royal Protocol guidelines around the palace, as well as in Celesteville. He is frequently seen around Cornelius while performing paperwork and scheduling appointments. He is the one who arranges Babar's countless meetings, counsels, and interviews on a daily basis. He does not have any tusks, proving that he is either very young or that he may have an illness of some sort. He has an elaborate collection of wigs, and wears it as one of his most prized assets.

He has shown to accumulate an extensive amount of understanding with diplomacy, in competition with Basil in this department. He is very adherent to rules, and becomes distraught if anyone breaks them. He is also against radical ideas of any sort, even if King Babar is in the question. He is quite organized, trusts Babar excessively, and is almost always in agreement with him. His quick and sensitive style often proves to confuse and incapacitate Cornelius (as seen in "Cruel to be Kind" and in "The One that Got Away").

He is an influencing character with great standards, often with unrealistic expectations. He is often actively against Rataxes and his kingdom, however seldom finds himself in agreement with his claims, especially in "Conga the Terrible". He is also bothered by the fact that Cornelius never trusts him with secrets, even if they weren't originally from him. In episodes like "The Coin" and in "The Old Lady Vanishes" , Pompadour exclaims in surprise at the climax why Cornelius didn't let him in on the explanatory sequence of the issue at hand. He is thoroughly recognized by his constant use of extravagant vocabulary and his elegant sense of humor. He occasionally toys with Cornelius about his seniority, specifically with his forgetfulness, however this sometimes reaches a dangerous limit (as proven in "Mango Madness"). Distraction may be tempted to move him away from his wishes, although he mostly attempts to remove any sort of obstacle which may come in his path. He has a habit of calling King Babar "Sire" (normally when asking for his permission on a certain concept), but this had a greater presence in much earlier episodes.

Seen on "Special Delivery" with Cornelius. 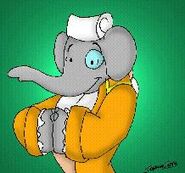 Add a photo to this gallery
Retrieved from "https://babar.fandom.com/wiki/Pompadour?oldid=4665"
Community content is available under CC-BY-SA unless otherwise noted.